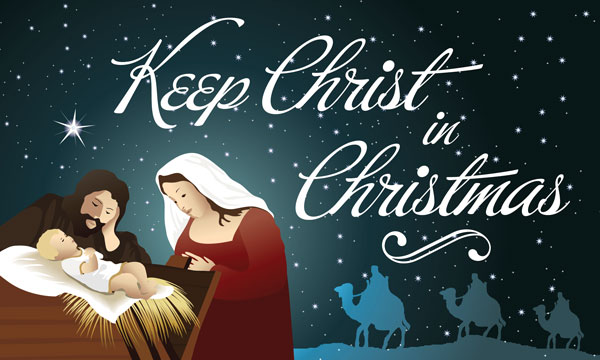 We are entering that favorite season of snow, trees, decorations, presents and, oh yeah, celebrating the birth of the Christ child.  This is also the season of the ‘war on Christmas’.  This is, in itself, a very hotly debated topic.  Some think it’s real, some think that it’s ridiculous and a made up right-wing political creation.  So let’s, then, take a quick look at whether there is such thing as a ‘war’ on Christmas.

Here’s what I know and I’ll try to keep it as simple as I can.  When I was a kid, our schools had Christmas plays, Christmas concerts and even Christmas vacation.  During the plays or concerts there were overtly Christian imagery and music.  Malls had trees with stars and angels on them and many towns had a nativity set displayed in the public square.   I don’t know if people wished each other ‘Merry Christmas’ or ‘Happy Holidays’ or some mixture of the two, but there was certainly no conflict about it.

Before I continue, let me state that not every town or school or store had these.  But there was a lot more co-mingling between the secular and sacred – between Santa and Christ. Interestingly, many Christians believed that the secular had just about completely taken over the sacred.  In fact, this is the main point behind the wonderful Christmas special “A Charlie Brown Christmas” (the main scene being Linus explaining the meaning of Christmas to Charlie Brown through a recitation of the birth narrative found in Luke).

That all said, things are different now.  Today it’s hard to find a school that has anything other than Winter Festivals, Holiday concerts or Winter concerts. How did this happen?  Someone somewhere had to make these changes.  And make no mistake, you’ll have a fight on your hands if you try to change things back.  Case in point – two years ago in December my wife, then a member of the Troy Area School Board, got involved in a situation where an administrator ordered the removal of sacred songs from the school choir’s school concert.  Despite a big community backlash, the administrator held her ground.  After doing some research , she realized that there was nothing illegal/unconstitutional about this (in fact, it’s established law that it’s OK).  So, taking her research to a School Board meeting, the school board overturned the administrators decision.  Sad, though, that it took an impassioned school board member with the courage to confront the situation in order to have something changed back to the way things used to be.

That said, let me posit the idea that we Christians are the worse perpetrators in this ‘war’.  Oh sure, we complain a lot of what other people do or say, but how are WE keeping the holiday?  What are WE teaching our children?  Is it really a BAD thing that schools don’t teach about Christmas anymore?  Do we really want to abdicate our responsibility to someone else?  Do we really want to entrust our child’s religious education to an untrained stranger that might even be hostile to the faith? And why is it important that some poor minimum wage clerk has to say ‘Merry Christmas’ instead of ‘Happy Holidays’?  How does complaining about this help spread the Kingdom of God?

And every year I hear the same thing from people in my churches: they are too tired, too busy, too frazzled keeping up with the demands of the season.  It’s about cards and lights and cookies and, most especially, shopping.  I’m not saying there is anything wrong with these things, but allow me to I point out that typically these demands have nothing to do with the birth of the Lord of Lords and King of Kings.  In other words, we Christians are distracting OURSELVES from the true meaning of Christmas.  Before we clean out the speck of dust in other people’s eyes in regard to Christmas, let’s yank that big old plank out of our own.

So, let us make a commitment to do our best to keep Christ in Christmas.  Not so much in forcing others to do so, but a purposeful effort to do so for us and our families.